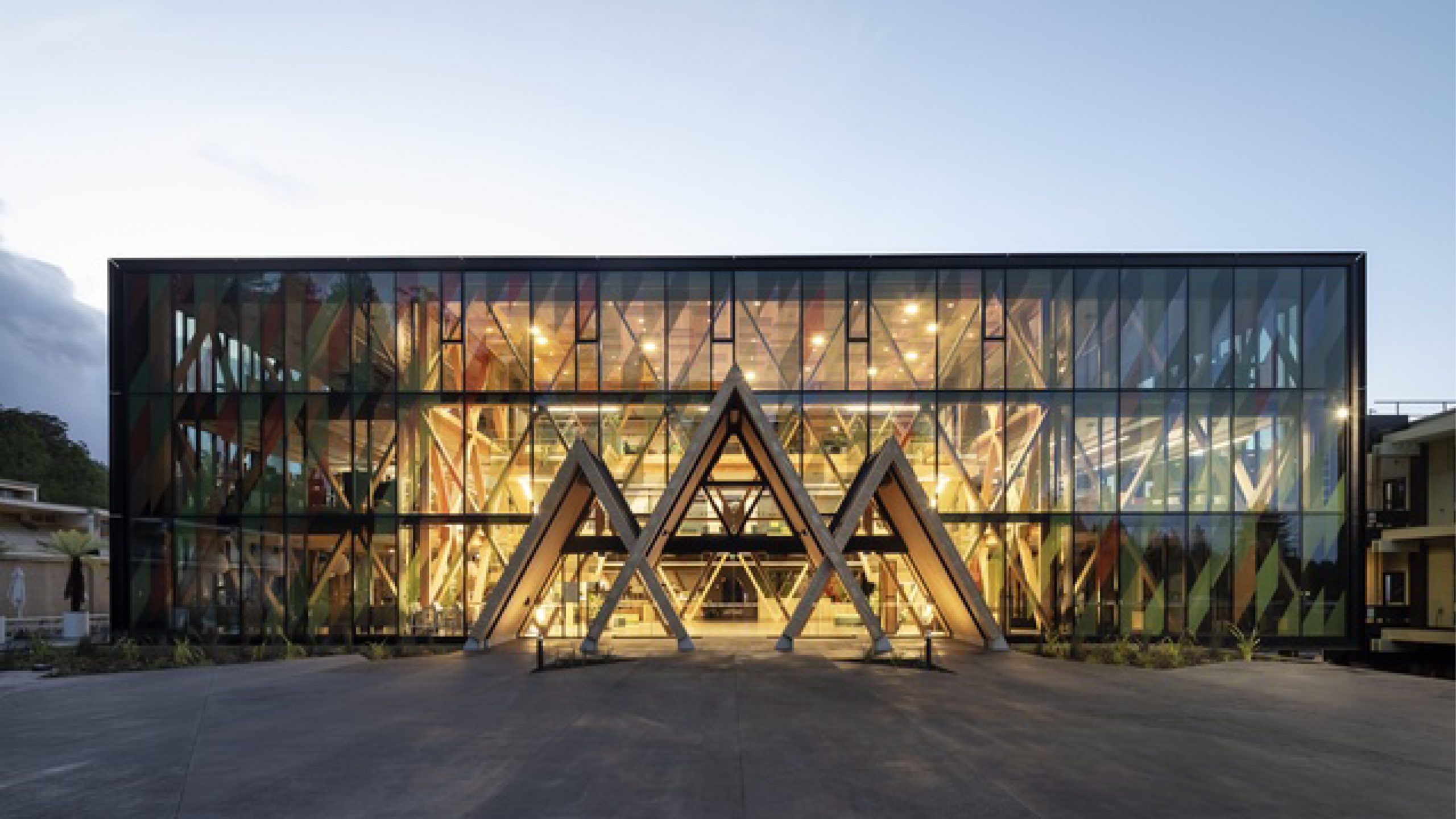 The technology of the trees

On my first visit to the sprawling Scion campus at Whakarewarewa, Rotorua, in 2012, for a New Zealand Herald feature about biofuels from wood, I arrived at a nondescript entrance via a driveway off Sala Street. Surrounded by forest, it felt like a step back in time to a very 1970s’ architecture – rows of sheds housing labs and offices, gliding on and on in a labyrinth of corridors. Naturally, for a Crown Research Institute focused on the science of forestry and all things wood, everything was made of timber: laminated beams, wooden floors, wooden panelling, spiral timber staircase – even wooden name tags on the office doors.

Today, as I approach Scion’s new, showy front door at what is now known as the Te Papa Tipu Innovation Park, the contrast couldn’t be more stark. We come via Tītokorangi Drive (formerly Long Mile Road), along the edge of the 5600-hectare redwood Whakarewarewa Forest, a mecca for mountain biking and other tourist attractions, such as the Redwoods Treewalk. The new way in to Scion’s $18-million Innovation Hub, Te Whare Nui o Tuteata, by RTA Studio in collaboration with Irving Smith Architects, is a master-planning design move. It gives Scion an inviting public interface with all the rows of labs now behind or beside this grand gesture. When the three-storey, coloured-glass box hovers into view, its unusual appearance sets up a sense of intrigue. An intrigue that appears to be working. The public is visiting in droves. We arrive around midday on a Wednesday and the new ground-floor Eastwood café is packed.

The entrance is a cross-laminated timber (CLT) porch outside a long, rectangular glass façade. It’s constructed using three intersecting glulam triangular frames creating a triple-peak portal – a central, two-storeys-high equilateral triangle flanked by two lower-height triangles. The triple triangles criss-cross, creating a dramatic geometry with two small triangles at its base fixing its six feet solidly to the ground. The facings of the triangles feature machine-routed Māori carving patterns by local carver Grant Marunui, giving representation to the three hapū of the area – Ngāti Hurungaterangi, Ngāti Taeotu and Ngāti Te Kahu. The glass façade is fritted with a diamond, tukutuku-like pattern, to reduce solar gain, in hues of evergreen green and deciduous brown and red, perhaps evoking the feeling of standing at the edge of a forest. Up close, the mystery deepens, as diagonal structural branches can be discerned through the glass.

The triple-peak porch pushes through the façade into a massive three-level-high atrium, bathed in dappled light falling through the fritted glass exterior. Inside is a revelation: the Hub’s timber diagrid skeleton, a startling array of 88 laminated veneer lumber (LVL) diamond and triangle-shaped frames.

A building that immediately reveals its bones and a transformational way to build in timber. This is not the traditional New Zealand architecture of joining wood sticks in posts and beams. These 4m equilateral triangles and 8m tall diamonds, discrete structural elements of high-performing LVL, are surprisingly slender, their strength due to innovative dovetail node joints, which slot and glue together in a celebration of engineered timber craft. The brainchild of engineer Alistair Cattanach of Dunning Thornton, the innovation, believed to be a world-first for a wooden diagrid structure of its size,  provides gravity support and bracing at the perimeter of the floor plates and all of the building’s lateral resistance. A key challenge was selecting the appropriate foundation system (a concrete perimeter wall and ground beams supporting LVL ‘double-T’ timber floor beams spanning 8m) on a site at risk of liquefaction or geothermal deformations. Plus working out how to make a rigid diagrid ductile for large earthquake forces or ground deformation. In a paper on the subject, Cattanach points out that the diagrid’s form meant its inherent stiffness would make it want to span across any differential ground deformations, which would result in excessive member sizes and unworkable connections. “If the diagrid could be split into sections that could be linked by ductile elements, they could allow the diagrid to conform to the ground deformations. This would allow us to limit the force exerted on the timber avoiding brittle failure.”

Initially, the proposal was to join all diagrid nodes with steel, U-shaped flexural plates (UFPs), which would act as energy-dissipation devices between the timber members. The idea was rejected, mainly because Scion wanted to prioritise the use of wood within the building, using the minimum steel necessary. In version II, Cattanach has the UFPs connecting between frames, using only a single flat plate. The noding forces are taken by “a multi-layered joint made from cross-banded LVL orientated appropriately to feed the forces from the diagonal members back into the horizontal ties and into the UFPs”.

No steel joining plates required. The building’s floors encircling the central atrium at the rear and the sides are supported on corbels on the inside face of the diagrid.

Wood in various forms is everywhere – in LVL floor beams and roof trusses, in CLT floors, lift shaft panels, meeting room walls and doors, and in the intricate atrium ceiling pattern of battens and plywood panels, apparently inspired by the structure of a radiata pine genome and coupled with a lighting arrangement reflecting the Matariki night sky. Then there’s the spectacular cantilevered scissor stairs – a hybrid of CLT, steel and LVL – floating in space on either side of the atrium.

Scion’s aim is for the building to be a showcase for timber and sustainable building principles. It comprises a ground-floor exhibition area, public café and main reception, meeting rooms, staff and tenant working spaces, and links to Scion’s myriad laboratories and testing facilities.

To help with operational sustainability, heating and cooling needs are reduced with an automated double-skin façade on the eastern face, on either side of the atrium, providing heat recovery in winter and the cavity regulating thermal gains in summer. Other energy-saving features include natural ventilation, solar shading and LED lighting. At present, Scion uses a natural-gas boiler for heating, resulting in the building using 80kWh/m2 annually, which compares reasonably favourably with the RIBA (Royal Institute of British Architects) 2030 target of 55kWh/m2/y. Plans to replace the natural-gas boiler with a woodchip-fired boiler would halve the operational emissions.

This is a building where you can see the technology of both the wood and the trees – the latter being the way trees take CO2 out of our atmosphere and transform it into oxygen for us to breathe and carbon in their trunks for us to use. On show is the use of sustainably harvested wood from New Zealand’s radiata pine plantation forests to store carbon for a long time: decades and even centuries, depending on the building’s lifespan.

The architects were sure they had created a sustainable building, especially in terms of the embodied carbon used in the construction process and its materials. To find out just how sustainable, they employed the eTool software life-cycle assessment methodology that enables calculation of the entire environmental impacts of buildings.

The assessment shows the building used over 550m3 of timber, which contains 454,648kg of carbon sequestered from the atmosphere in the building. That’s the same amount as the other CO2 emissions-producing materials used, such as steel, glass and concrete. With one cancelling the other out, the overall effect is to make the building net-zero embodied carbon emissions; possibly the first building in New Zealand of this size to be able to make this claim. Modelled over a 60-year building lifespan, that equates to 562.10kg CO2 eq/m2 (CO2 equivalents per square metre) locked in the building materials. Impressive when compared with the RIBA target of 500kg CO2 eq/m2 or less by 2030 for whole-of-life embodied carbon in building.

Scion scientists estimate the Hub’s storage is roughly equivalent to the emissions from 160 return flights from Auckland to London and it took just 35 minutes for New Zealand radiata pine plantations to grow the same amount of wood used in the building. The design provides a compelling argument for timber buildings across all typologies to play a significant role in reducing New Zealand’s CO2 emissions amidst the current climate emergency. Scion Science Leader, Wood & Fibre, Doug Gaunt says sequestering of CO2 from the atmosphere is key to reducing greenhouse gas emissions. “Trees are well known to be an efficient sequestrating mechanism and timber used in building provides long-term storage. We urgently need to get timber buildings as the mainstream construction option.”

The architects are committed to further use of eTool in their practices. I ask what might have been had they used eTool at the beginning of the design process rather than at that end. All agree that, while there are inherent dangers in designing-by-spreadsheet, it would have allowed them to consider the effects of different design options, such as using timber joinery instead of aluminium, less concrete in the ring beam, or perhaps less steel in the cantilever scissor stair. On the operational front, eTool would have demonstrated both the environmental costs and the benefits of, perhaps, using a solar panel array.

Such speculations also have to be balanced against architectural aims and building costs. They show that if, today, Scion’s Innovation Hub is net-zero embodied carbon, it wouldn’t take much to go one better and deliver carbon-negative architecture.