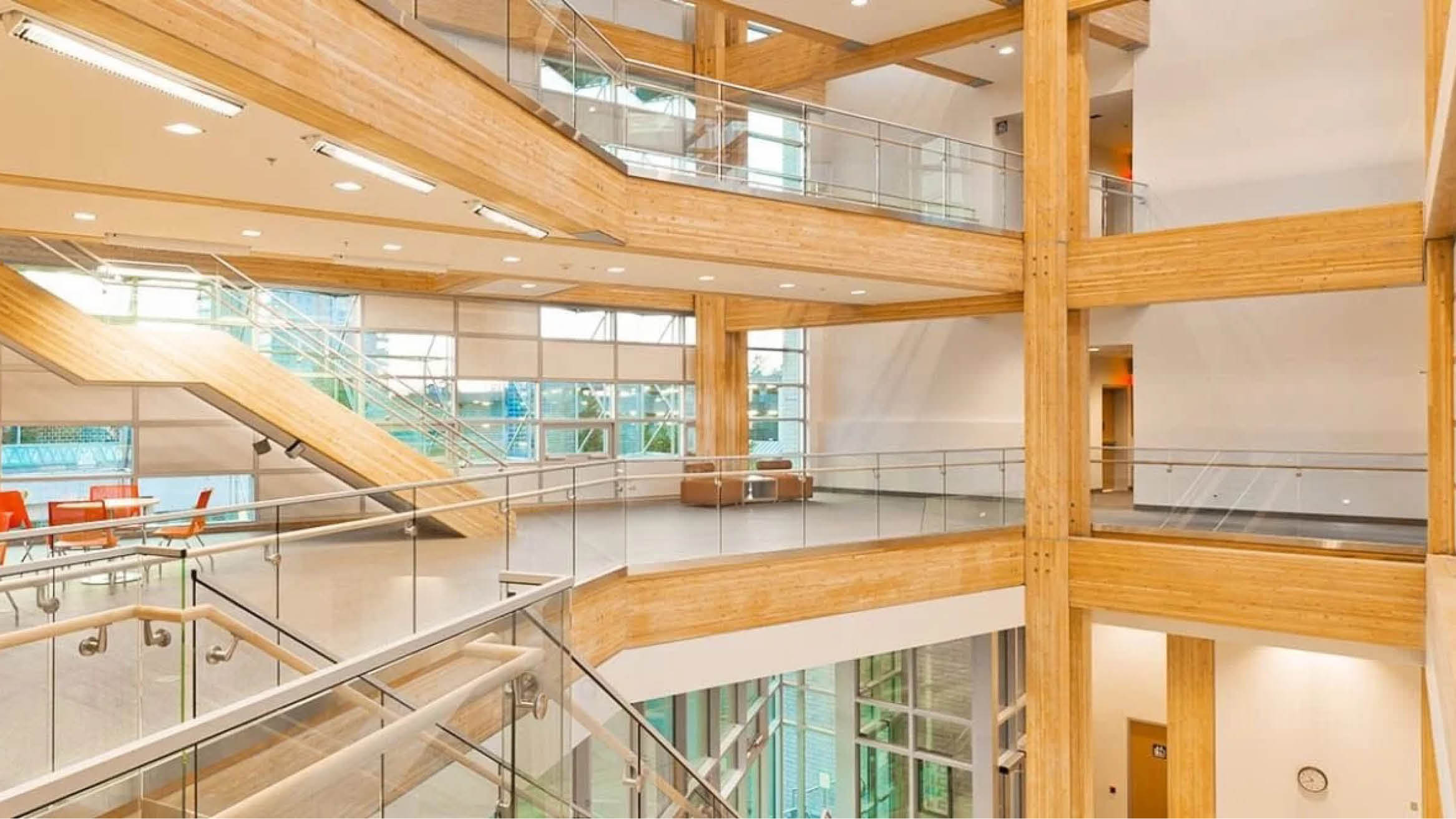 The hottest new thing in sustainable building is, uh, wood

The many, many benefits of using wood in place of concrete and steel.

Architects, builders, and sustainability advocates are all abuzz over a new building material they say could substantially reduce greenhouse gas (GHG) emissions in the building sector, slash the waste, pollution, and costs associated with construction, and create a more physically, psychologically, and aesthetically healthy built environment.

The material is known as, uh, wood.

Trees have been used to build structures since prehistory, but especially after disasters like the Great Chicago Fire of 1871, wood came to be seen as unsafe and unstable relative to the two materials that have since become staples of the construction industry worldwide: concrete and steel.

However, a new way of using wood has put the material back in the spotlight. The hype is focused on structural timber or, as it’s more popularly known, “mass timber” (short for “massive timber”). In a nutshell, it involves sticking pieces of soft wood — generally conifers like pine, spruce, or fir, but also sometimes deciduous species such as birch, ash, and beech — together to form larger pieces.

Yes, the hottest thing in architecture this century amounts to “wood, but like Legos.”

To create CLT, lumber boards that have been trimmed and kiln-dried are glued atop one another in layers, crosswise, with the grain of each layer facing against the grain of the layer adjacent. Stacking boards together this way can create large slabs, up to a foot thick and as large as 18-feet-long by 98-feet-wide, though the average is something more like 10 by 40. (At this point, the size of slabs is restricted less by manufacturing limitations than by transportation limitations.)

Slabs of wood this large can match or exceed the performance of concrete and steel. CLT can be used to make floors, walls, ceilings — entire buildings. The world’s tallest mass timber structure, at 18 stories and over 280 feet, was recently built in Norway; there’s an 80-story wooden tower proposed for Chicago.

I talked to lots of people who are extremely excited about mass timber, both for its architectural qualities and for its potential to help decarbonize the building sector, and a few raised important cautions. We’ll run through all the advantages and caveats in a moment. But first, let’s take a quick spin through the history of mass timber and where it currently stands.

CLT was first developed in the early 1990s in Austria, where softwood forestry is extremely common. It was championed by researcher Gerhard Schickhofer, who is still active and who won a prestigious forestry prize last year for his work to standardize and secure popular support for the new material.

But in the US, CLT can’t (yet) compete with stick-frame construction, which is cheap and ubiquitous. It wasn’t until North American architects got the idea of using CLT in bigger buildings, as a substitute for concrete and steel, that it began popping up in North America in the 2010s.

In 2015, CLT was incorporated into the International Building Code (IBC), which jurisdictions across the US adopt as their default. A set of new changes that will enable mass timber structures up to 18 stories tall have been accepted and are expected to be formalized into the newest IBC code in 2021.

Some jurisdictions in the US have been aggressive about supporting mass timber, including Washington and Oregon (which have preemptively accepted the new changes to the IBC; Oregon incorporated CLT as a “statewide alternative method” in 2018).

The Pacific Northwest is understandably excited about a possible shift to wooden building materials, as it is home to copious forests and idled sawmills.

“Timber harvest in [the Pacific Northwest] has declined significantly as a result of the weak domestic demand during the housing crisis, which has been devastating to the forest products industry,” reports a recent study of CLT lifecycle emissions. “In Washington State, the volume of lumber produced declined 17% between 2014 and 2016 and, compared to 10 years ago, lumber mills (the largest sector by timber consumption) produced one third fewer boards.”

Nationally, forests are so overstocked that the Forestry Department is giving out $9 million in grants for new ideas for how to use wood. Plenty of local communities would welcome new demand.

While CLT is continuing to explode in Europe and is accelerating in Canada, it remains hampered in the US by anachronistic and overly prescriptive building codes, limited domestic supply, and the small-c conservative thinking of the building trades.

On the supply front, Vaagen Brothers, a well-known Washington sawmill, has already spun off a second company focused on CLT; other mills are expected to follow suit. A company called Katerra recently opened the largest CLT manufacturing facility in North America in Spokane, Washington, with state lawmakers on hand to celebrate. That may help mass timber get going in earnest in the region.

For now, there are a number of flashy one-off CLT projects in the US: the Catalyst innovation hub in Spokane, the T3 office building in Minneapolis, the Carbon 12 condominiums in Portland, Oregon, Franklin Elementary School in West Virginia, and more. But because they are one-offs, they require a lot of extra work in testing, designing, and securing permits. And there’s a shortage of both suitable materials and contractors and builders familiar with them. “It’s not a mature industry,” says architect Michael Green, whose seminal 2013 TED Talk on mass timber helped kickstart interest in the US. (Side note: Katerra recently acquired Michael Green Architecture.)

Nonetheless, the growing enthusiasm of builders and advocates seems to be chipping away at the resistance. Why are they so geared up?