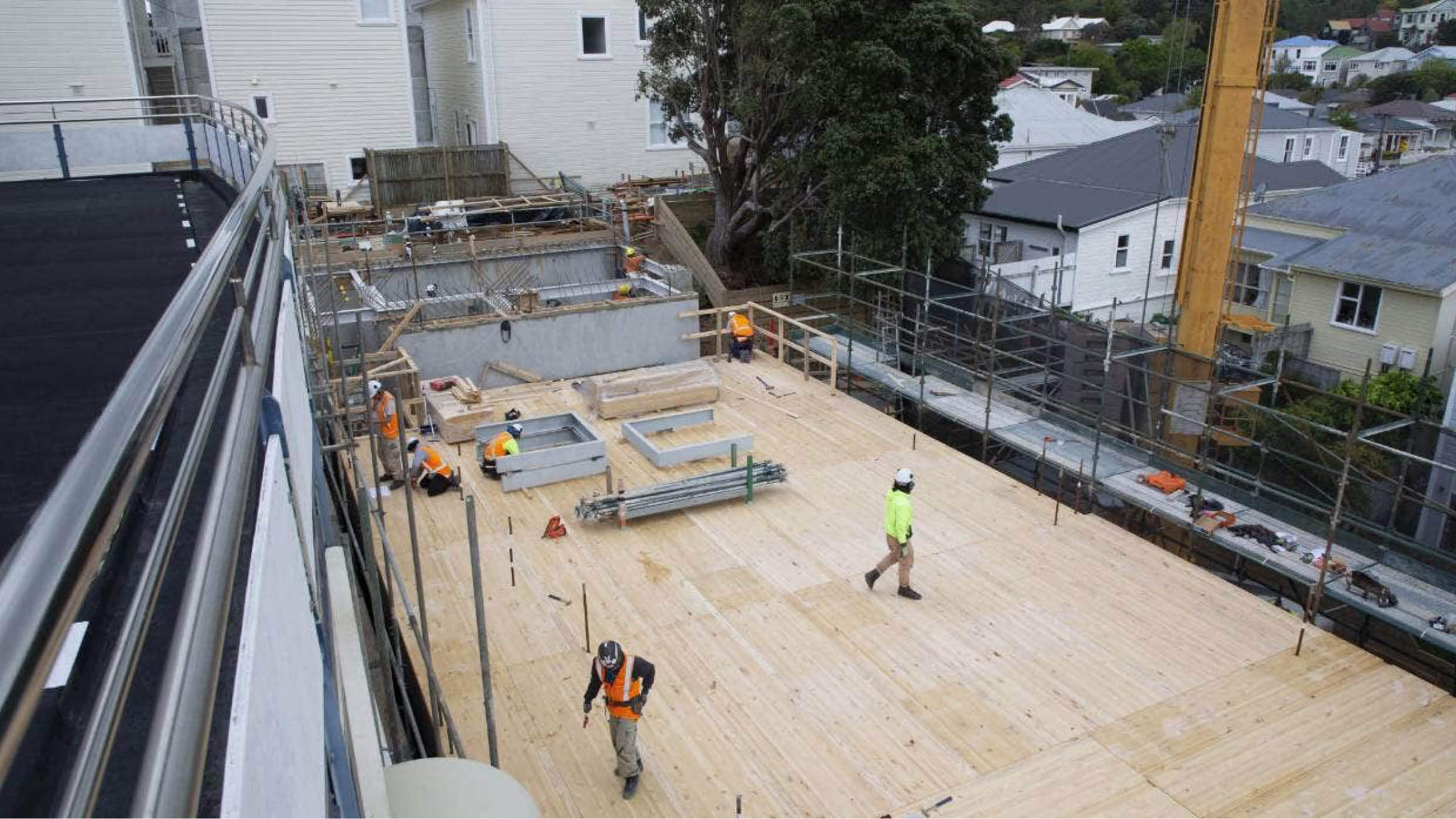 A $19 million apartment development in Wellington’s Newtown is under construction, but the on-site noise isn’t as loud as people might expect.

That’s because the building’s timber walls and floors have been manufactured and shipped from Christchurch. Then, they are slotted into place on the construction site.

Prefabrication, where parts of a structure are already made and assembled on site, is not common in New Zealand – and the Mary Potter Hospice apartments is considered one of the first of its kind and scale when it comes to prefabrication.

The 41-unit apartment block, made up of studios and two-bedroom homes, will be ready to rent by the middle of next year.

Mary Potter Hospice’s chief executive Brent Alderton​ said building the apartments was a way to close the gap between the amount of money the government gives – about $7m – and the amount it raises from its op-shops and fundraising. Its current operating revenue was $14m.

The hospice has been fundraising for the apartments. It also received donations from Mike O’Sullivan and Brian Galt while the rest of the cost was covered by a bank loan.

The apartments were an innovative way for it to fund its palliative care services in Wellington, Porirua and Kāpiti, Alderton said.

Building the Mary Potter Hospice apartments on Mein St has been controversial in the past, with tempers flaring at community meetings. Eleven submissions previously opposed the build citing privacy, parking availability, shading, as well as increased traffic and noise levels.

After consultation, the building’s design was changed with parking and shade in mind. The scale was reduced and the southern end has been brought down – now, the development is over five storeys but staggered due to the steep site.

The decision to make the project prefab meant noise could be minimised as the construction site was near the hospice and other neighbours, he said.

It was also an efficient and cost-effective approach compared to the more traditional way of building, he said.

It was no secret that housing supply in Wellington was limited, so providing 41 units for people to rent in Newtown was beneficial for the city, he said.

The hospice would not be selling any of the units and rent would be at market price, he said.

Architect Huw Parslow​, who has been working on this project for six years, said it was not common in New Zealand to have prefabricated developments of this size.

Opting for prefabrication meant timber walls and floors were coming in panels and craned onto the building, he said.

It also brought down the period of construction on site making it a safer option for workers too, he said.

In a dramatic move to reshape the country’s towns and cities, the Government announced in July that it would stop councils from imposing height limits of less than six storeys and force them to accept developments with no car parks.

The National Policy Statement on Urban Development aims to increase the density of housing in urban centres by setting rules for planning decisions made by local councils. The overall intention of the plan is to dramatically increase housing development in urban areas like Wellington City.

While the Mary Potter Hospice got the green light with its apartment block through the Housing Accords and Special Housing Areas Act 2013, the building was being constructed as Wellington’s draft housing plan is debated.

Parslow said densification within towns and putting housing in the right places was needed.

“As far as prefabrication, it’s the way of the future especially with the housing crisis we’re facing. If we don’t build smarter we’re not going to meet demand,” he said.

“Prefabrication is a far better solution and it’s safer … it’s fantastic to finally see [the apartments] being realised.

“It provides income in perpetuity and it’s a great opportunity for the hospice to keep going.”