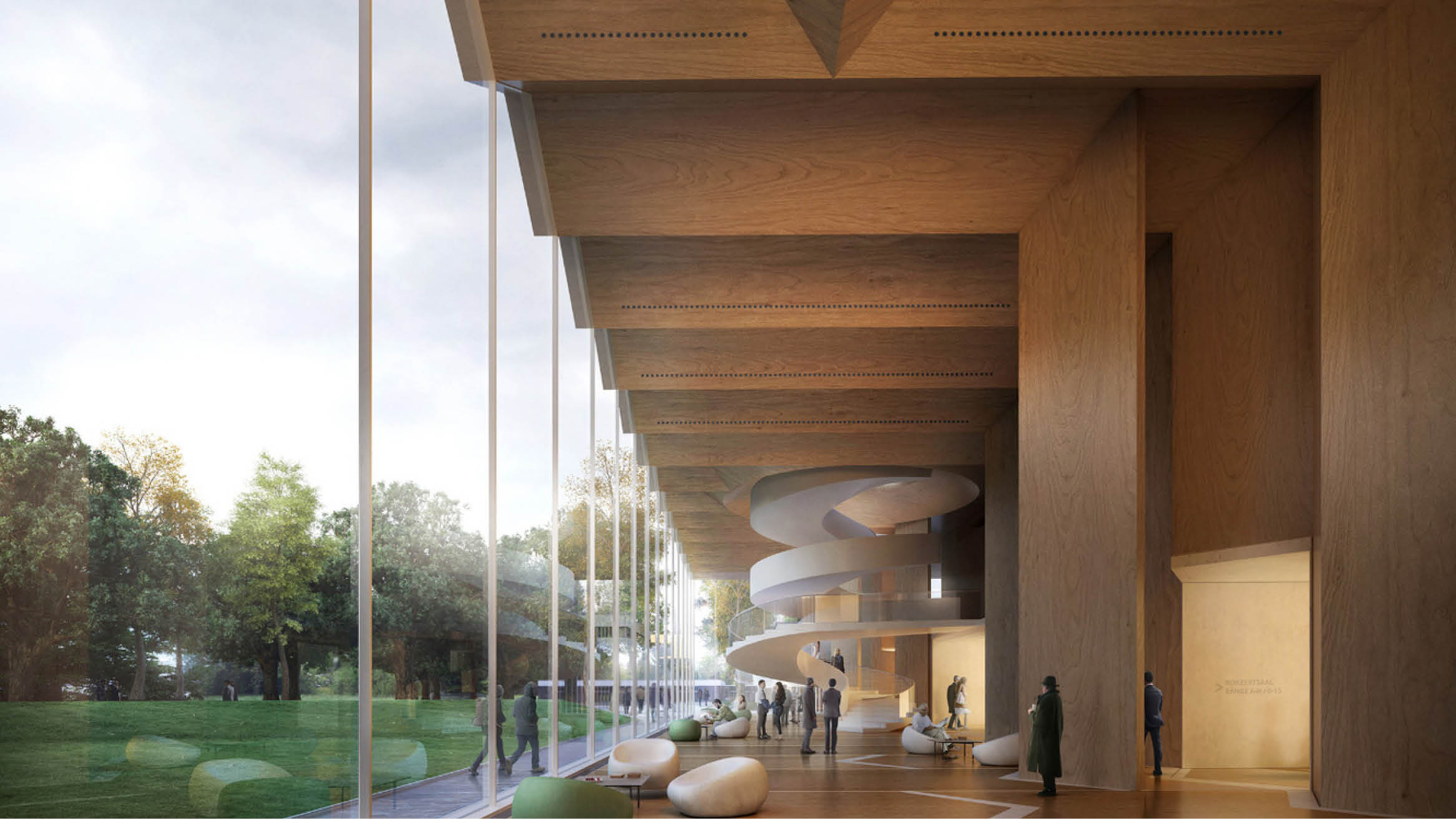 Material of the Future: 4 Architects that Experiment with Cross Laminated Timber

Every so often, the field of architecture is presented with what is hailed as the next “miracle building material.” Concrete enabled the expansion of the Roman Empire, steel densified cities to previously unthinkable heights, and plastic reconstituted the architectural interior and the building economy along with it.

But it would be reasonable to question why and how, in the 21st century, timber was accorded a miracle status on the tail-end of a timeline several millennia-long. Though its rough-hewn surface and the puzzle-like assembly it engenders might seem antithetical to the current global demand for exponential building development, it is timber’s durability, renewability, and capacity for sequestering carbon—rather than release it—that inspires the building industry to heavily invest in its future.

Cross-laminated timber (CLT), a highly resilient form of engineered wood made by gluing layers of solid-sawn lumber together, was first developed in Europe in the early 1990s, yet the product was not commonly used until the 2000s and was only introduced into the International Building Code in 2015. While mid-to-large range firms around the world have been in competition to build the largest or the tallest timber structures to demonstrate its comparability to concrete and steel, a number of independent practitioners have been applying the latest methods of fabrication, computational design techniques, and visualization software to the primordial material. Here, AN exhibits a cross-section of the experimental work currently being pursued with the belief that timber can be for the future what concrete, steel, and plastic have been in the past.

In the Fall of 2018, 15 of professor AnnaLisa Meyboom’s students at the University of British Columbia (UBC), along with David Correa at University of Waterloo, Oliver David Krieg of Intelligent City, and 22 industry participants designed and constructed the third annual Wander Wood Pavilion, a twisting, latticed timber structure made up entirely of non-identical components.

By taking advantage of the advanced fabrication resources available at the UBC Centre for Advanced Wood Processing, including a CNC mill and a multi-axis industrial robot, the project was both a learning opportunity for its design team and a demonstration to a broader public that timber is a more than viable material to which contemporary fabrication technologies can be applied. The pavilion forms a bench on one end that’s large enough for two people, a public invitation test the structure’s strength and durability for themselves.

While the pavilion only required three days to fabricate and assemble on-site, a significant amount of time and energy was spent ensuring its quick assembly when the time came. A rigorous design workflow was established that balanced an iterative design process with rapid geometric output that accounted for logical assembly sequencing. Every piece of the pavilion was then milled to interlock into place and be further secured by metal rivets.

The project was devised in part to teach students one strategy for narrowing the gap between digital design and physical fabrication while applying a novel material. In this vein, a standard industrial robot was used throughout the fabrication process that was then “set up with an integrator specifically to work on wood,” according to Meyboom.

While Gilles Retsin, the London-based architect and professor at the Bartlett School of Architecture, has long experimented with both computational design and novel methods of fabrication, a recent focus on timber has propelled his practice into a bold new direction. A giant wooden structure installed at London’s Royal Academy in early 2019, for instance, was the architect’s first attempt at applying augmented reality to modular timber construction through the use of Microsoft’s Hololens. “We used AR to send instructions directly from the digital model to the team working on-site,” Retsin explained. “AR, therefore, helps us understand what a fully-automated construction process would look like, where a digital model communicates directly with people and robots on site.”

In a recent international competition set in Nuremberg, Germany, Retsin set his sights on a much larger scale for what would have been the world’s first robotically prefabricated timber concert hall. Designed in collaboration with architect Stephan Markus Albrecht, engineering consultancy Bollinger-Grohmann, and climate engineers Transsolar and acoustic specialists Theatre Projects, the proposal takes advantage of the site’s location in a region with an abundance of timber while envisioning the material’s application to a uniquely challenging building type. The building’s form exhibits the material’s lightness using 30-foot sawtooth CLT prefabricated modules over the main lobby spaces, which are exposed from the exterior thanks to a seamless glass envelope.

“Designing in timber not only means a more sustainable future, but also has architects profoundly redesigning buildings from the ground up,” said Retsin. “It’s a challenging creative task, we’re really questioning the fundamental parts, the building blocks of architecture again.”

For SCI-Arc professor Casey Rehm, working with timber has meant challenging many issues in the field of architecture at once. Timber is a rarely-considered building material in Los Angeles given the high time and material costs associated with its transportation and manufacturing. “Right now,” Rehm said, “the industry is manually laying up two-by-sixes into industrial presses, pressing them into panels, and then manually cutting window openings.” But if timber waste itself was adopted as a building material, he argued, the material could be far more globally cost-efficient.

While timber has been used in the construction of increasingly large structures around the world, such as multistory housing developments and office buildings, Rehm believes the material can be reasonably adapted to a smaller scale for quick deployment. In this vein, Rehm has been researching strategies with his students for producing inexpensive CLT panels for the construction of homeless housing and accessory dwelling units in Los Angeles, a city with a, particularly conspicuous housing shortage.

But aside from its potential as a cost and material-efficient material, the architect has applied timber to even his most exploratory design work. NN_House 1, a sprawling single-floor home Rehm proposed in 2018 for the desert plains of Joshua Tree, California, was designed in part using a 3D neural network to develop ambiguous divisions between rooms, as well as to blur the divide between interior and exterior. The AI was trained on the work of modernist architects—while producing idiosyncrasies of its own—to develop a living space with multiple spatial readings.

As an architect practicing in Finland, Kivi Sotamaa is certainly not unique in his community for his admiration of the far-reaching possibilities of timber construction. He is, however, producing novel research into its application at a domestic scale to reimagine how wood can be used as a primary material for home construction.

The Meteorite, a three-story home the architect has designed near Helsinki constructed entirely of locally-grown CLT, was designed using an organizational strategy the architect has nicknamed ‘the misfit.’ This system, as Sotamaa defines it, creates two distinct formal systems to generate room-sized interstitial spaces that simultaneously act as insulation, storage space, and housing for the building’s technical systems. “Aesthetically,” Sotamaa elaborated, “the misfit strategy allows for the creation of a large scale monolithic form on the outside, which addresses the scale of the forest, and an intricate human-scale spatial arrangement on the interior.” Altogether, the architect estimates, the home’s CLT slabs have sequestered 59,488 kilograms, or roughly 65 tons, of carbon dioxide from the atmosphere.

The Meteorite was developed and introduced to the client using virtual reality, and Sotamaa hopes to apply other visualization technologies to the design and production of timber architecture, including augmented reality that could allow builders to view assembly instructions in real-time on site. “When the pieces are in order on-site and [with clear] instructions,” Sotamaa explained, “the assembly of the three-dimensional puzzle can happen swiftly and efficiently, saving energy and resources when compared with conventional construction processes.”