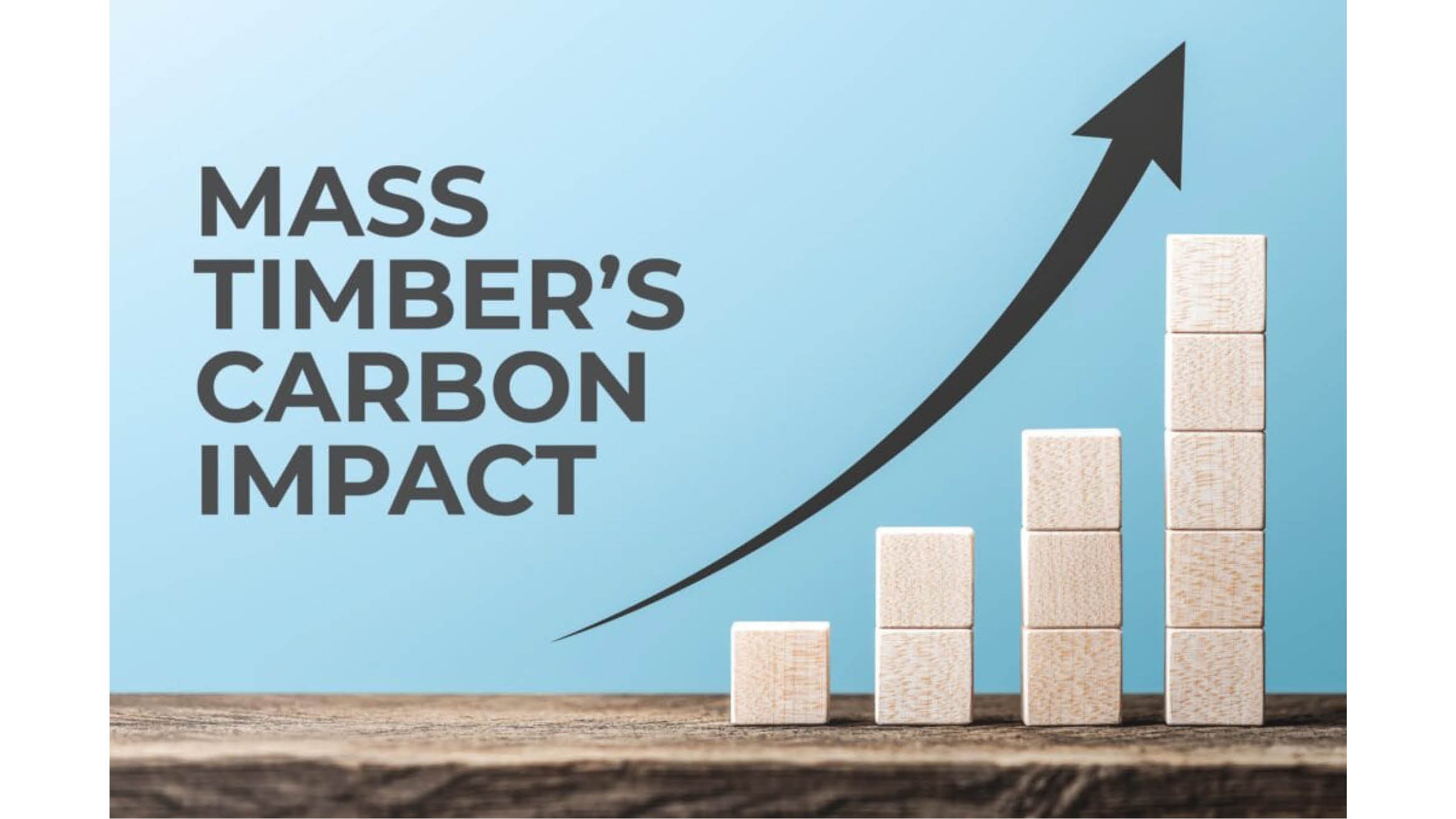 Though mass timber offers many benefits over traditional building materials, its renewable nature and negative carbon impact are perhaps the most exciting. Turning trees into timber emits fewer greenhouse gases than the manufacture of traditional building materials like steel and concrete. That alone is a carbon benefit. However, it’s the carbon that is removed from the atmosphere and stored in the wood — the sequestered carbon — that is the real game-changer. It means that mass timber has the potential to be more than just a carbon-light construction method. It can become a carbon sink. Industry advocates claim that by 2034, the North American construction industry as a whole will store more carbon than it emits.

Dramatically reducing the carbon emissions from the construction industry is a priority in order to reach emission reduction targets. Currently, construction materials are responsible for around 11% of global greenhouse gas (GHG) emissions. Given the scale of new construction planned globally and the lack of market-ready at-scale decarbonization strategies for construction material production, this number could increase relative to many other major contributors like industry (30%), transportation (22%), and building operations (28%). To understand why, we have to understand the difference between the impact of operational carbon and embodied carbon.

At Mantle314 we shine a light on climate risks and opportunities for business, and advance strategies to thrive. We see embodied carbon as one of the most important climate opportunities over the next decade since it is not widely well understood or managed, and has huge potential risks. We help government and business leaders make decisions to reduce their embodied carbon footprint. To learn more, read our research on the topic in reports such as this TD Future Cities Centre – Net Zero Carbon Construction Report.

This leads to three reasons why over the next decade or so, embodied carbon in the built environment is a particularly important issue. Firstly, for new construction projects built today as shown below in the graph Total Carbon Emissions of Global New Construction from 2020-2050, by 2030 74% of carbon emissions will come from their embodied carbon, and only 26% from their operational carbon. This means that to meet short-term carbon emission goals (under the Paris Agreement, Canada is committed to reducing emissions by 30% below 2005 levels by 2030), reducing embodied carbon must be a priority.

Thirdly, new construction has increasingly strict limits placed on operational carbon. Building codes require a minimum level of energy efficiency, which means new construction emits less operational carbon than previously, and with each code update the efficiency requirements increase. There are currently no such regulatory requirements on embodied carbon in most places. The materials we build from can be extremely polluting and can be shipped from across the world. Why are we heavily regulating operational carbon but ignoring embodied carbon? Embodied carbon regulations are starting to be introduced in progressive jurisdictions. Many of them are looking at mass timber as a win-win-win.

So how does mass timber reduce the embodied carbon of buildings? And how likely is it that the industry will achieve net negative emissions?

There are two reasons for mass timber’s beneficial embodied carbon impact. The first is the avoided emissions when compared to traditional building materials like concrete and steel. The second is the sequestered carbon pulled from the atmosphere and stored in the wood

Avoided emissions are rather straightforward. The manufacture and transport of mass timber uses less energy and emits less carbon than similar processes for concrete or steel (Figure 4 below). For an amount of product with the same amount of strength, mass timber emits fewer GHGs.

Sequestering carbon is slightly more complicated. When trees grow, they take CO2 from the atmosphere and turn it into wood through photosynthesis, where sunlight and chlorophyll convert CO2 and water into wood, until through decomposition it returns to the atmosphere.

Some argue that sequestration shouldn’t be included in any embodied carbon calculation. If after the building’s useful life cycle the timber ends up rotting, the sequestered carbon in the wood will be returned to the atmosphere. This might be true if the mass timber is left to rot in an unmanaged landfill, but that is not a likely outcome. There could be many potential uses for mass timber decommissioned from a building including reuse in furniture and other non-structural decorative applications like internal finishings. Any landfill that accepts timber would likely employ methane capture and reuse meaning only a fraction of the carbon would be released to the atmosphere.

There is a net reduction in atmospheric carbon even in the unlikely event that all trees or mass timber elements eventually rot and their carbon returns to the atmosphere as long as the wood is harvested from responsibly managed forests without clear cutting. This is because a portion of the carbon removed from the atmosphere during tree growth gets stored in the soil. So even if carbon sequestered in wood returns to the atmosphere, the responsibly managed forest as a whole remains a carbon sink.