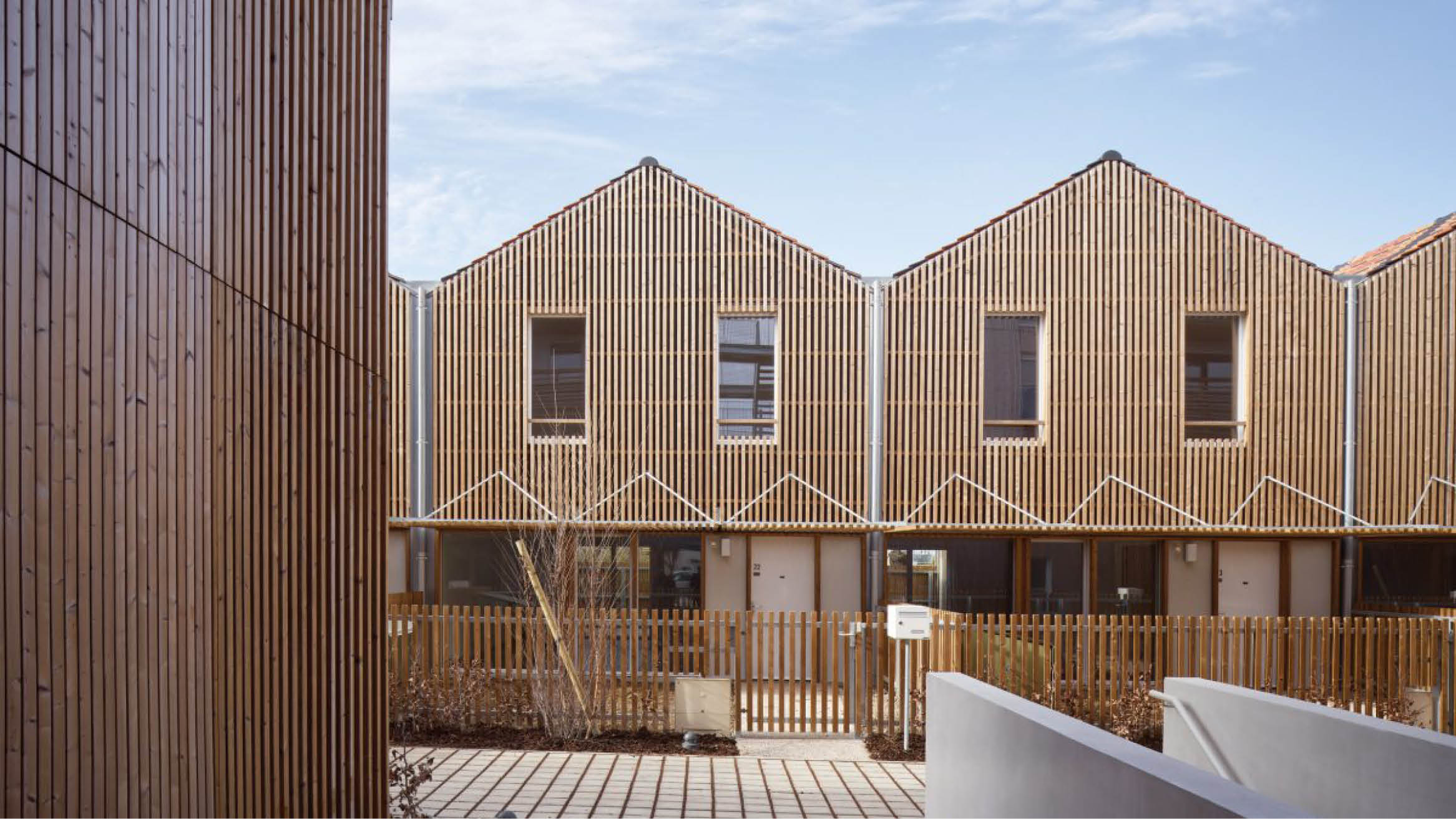 Timber is increasingly being viewed by the international community as a vital tool in the fight against climate change, due to the material providing an immensely beneficial carbon store in all the buildings it is constructed with. European leaders are fast recognising, that to meet carbon-neutral pledges, timber must be adopted as the main concrete substitute. Nowhere is this architectural shift demonstrated more clearly than in France.

President Macron has pledged that all state-funded buildings in France must contain at least 50% wood. This policy will be introduced in 2022 and has already resulted in numerous French architects designing aesthetically pleasing and environmentally beneficial social housing projects across the country.

One such undertaking is the construction of 26 wood dwellings in Chalon-sur-Saône in eastern France. The development has been designed by the Paris based architects ODILE + GUZY with a state-provided budget of €2.9m across an area of 1810m².

The plan of the development consists of intermittent timber buildings clad on the outside with wooden vertical beaming. The structures are then interspersed with ‘void spaces’ in which evergreen vegetation will be planted to provide aesthetic and health benefits to the residents.

The timber used throughout the development is thermally modified wood spruce. Thermo-modification refers to the process of heat treating the timber in an oxygen devoid environment, removing any destabilising organic compounds. Consequently, the wood is far less likely to absorb moisture, allowing for a longer-lasting and more durable structure.

The use of tilted timber roofing is designed to recreate the appearance and characteristics of traditional Burgundy buildings. In consequence, the project is constructed to fit seamlessly into the surrounding landscape whilst demonstrating the environmental and aesthetic benefits of timber.

However, although timber does make up a substantial amount of the development the use of concrete in the floor slabbing demonstrates that wood can’t be used at every stage of construction. Timber, like every material, has its limitations. In this instance, due to timber’s tendency to shrink and swell due to the climate conditions, it becomes dangerous to ground the floor on a moving material. Consequentially it often has to be substituted in these instances for more rigid and inflexible materials such as concrete.

This project perhaps indicates the future direction of architecture in France, acting as a forerunner for President Macron’s proposed 100 urban farms in the suburbs of major city across the country. These plans all lie within France’s drive for carbon neutrality by 2050 alongside many other European nations.

This project demonstrates how timber can be used in establishing environmentally beneficial and aesthetically pleasing buildings. In a time when the world’s population is growing at such a rapid rate and demand for housing is greater than ever; these innovations are vital for the wellbeing of future generations. France’s decision to promote a sustainable material such as timber, is a major step in the right direction for achieving a more ecologically considerate planet.