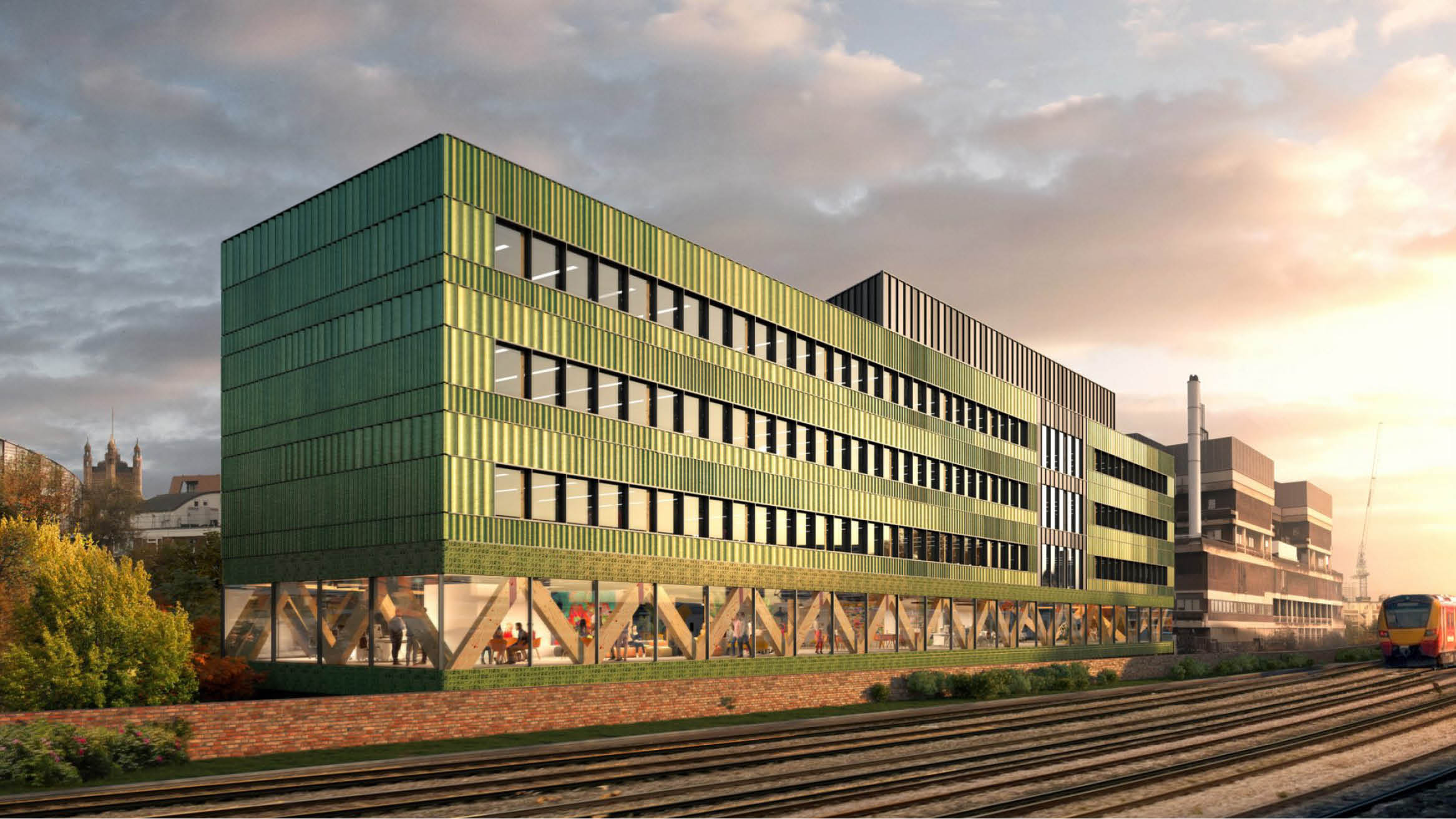 The architecture studio designed the carbon-neutral office as it focuses on creating more sustainable architecture to meet the aims of climate change network Architects Declare.

“As founding signatories of Architects Declare, we have made a public commitment to creating net-zero carbon buildings by 2030, and it is our aim on every building we design,” said Feilden Clegg Bradley Studios associate Joe Jack Williams.

“For the Old Paradise Street development, we have an opportunity to provide a net-zero carbon building that can host environmentally conscious businesses that can’t afford to build their own building,” he told Dezeen.

Set to be built on Old Paradise Street alongside a railway in Vauxhall, London, the office will be directly opposite Damien Hirst’s Newport Street Gallery, which was designed by Caruso St John Architects and which won the Stirling Prize in 2016.

The timber-framed building will contain 5,500 square metres of office space.

Its structure, which was designed with Webb Yates Engineers, will be a combination of cross-laminated timber (CLT) slabs and cores, glued laminated timber (glulam) beams and some supporting steel beams on a concrete foundation.

Feilden Clegg Bradley Studios calculated that the sequestered carbon contained in the timber is sufficient to make up for the carbon emissions generated during the construction process as well as the first 60 years of the building’s operation.

“The initial carbon sequestered by the timber structure will offset the rest of the embodied carbon for the structure and facade, in addition to nearly 60 years of operational carbon emissions,” said Williams.

“Accounting for the sequestered carbon in this way is not widely done, and we wanted to meet that debate head-on so we can have clarity moving forward,” Williams continued.

“There is already a focus on operational carbon for buildings, particularly in London, but for Paradise we’ve been able to talk about the increasing issue of embodied carbon, moving away from carbon-intensive concrete and steel towards renewable materials.”

Within the building, the glulam beams and CLT floor plates will be exposed throughout the office spaces.

“From a sustainability viewpoint, CLT is one of the few renewable structural materials available and can be mechanically fixed to enable it to be simply reused at the end of its life,” said Williams.

“But it’s not just about sustainability, it also provides a beautiful, warm, natural finish that fits into our aims of delivering a healthy environment.”

UK architecture practice Feilden Clegg Bradley Studios was founded in 1978 and is now led by Keith Bradley and Peter Clegg. The studio won the RIBA Stirling Prize for the Accordia housing development in 2008.

It joined the other Stirling Prize-winning firms, including Zaha Hadid Architects and David Chipperfield Architects, in calling for architects to shift their behaviour towards climate change by signing up to Architects Declare last year.

Earlier this year another founding signatory – Foster + Partners – came under fire for designing a new airport in Saudi Arabia.