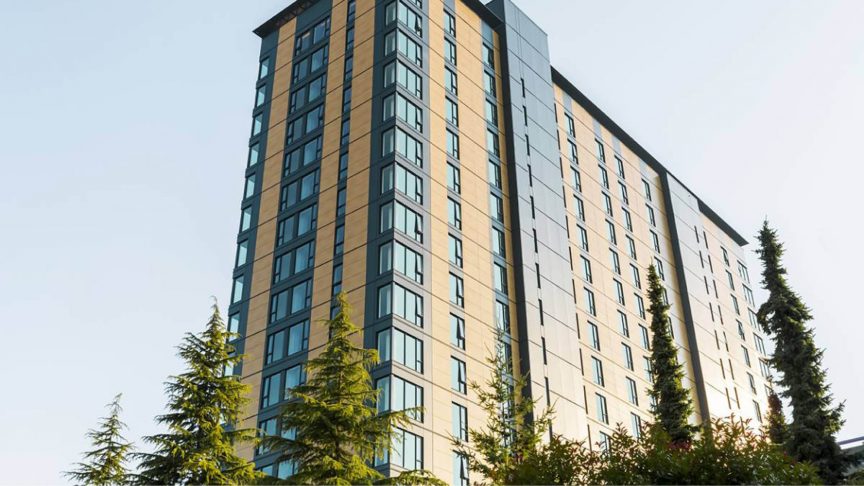 She recalled that during the time she worked as an architect, she would tell clients that green buildings can be pleasing to the senses.

“I always had to explain that a green building doesn’t need to be boring,” Ebrahimi told the Straight in a phone interview. “It actually can be beautiful.”

Ebrahimi is a Vancouver-based senior analyst with the buildings and urban-solutions program of the Pembina Institute, a think tank focused on energy.

Because of her background in architecture, Ebrahimi puts the VanDusen Botanical Garden Visitor Centre at the top of her list of favourite green buildings in Vancouver.

“From the perspective of someone who looks at a building and wants to see something beautiful, I think the design team there has done a great work, and I can personally connect to that,” Ebrahimi said.

Designed by architecture firm Perkins and Will, the VanDusen Botanical Garden Visitor Centre has an orchid petal–inspired green roof and a host of renewable-energy features.

The centre produces its own energy by using geothermal boreholes, solar photovoltaics, and solar hot-water tubes. Heating and cooling in the building is done by a solar chimney, which also assists in natural ventilation.

Vancouver architect Marianne Amodio also cited the visitor centre at VanDusen as her favourite, describing its design as an “intersection of art, science, and nature”.

“When visiting it, it almost feels like you’re inhabiting this unusual middle ground between building and nature, which only serves to strengthen its importance as a green building,” Amodio told the Straight.

Vancouver is regarded as a global centre for excellence in green and environmentally sustainable buildings.

According to Pembina’s Ebrahimi, the city reinforced its leadership role in April 2019 when council approved a Climate Emergency Response program. One of the program’s “six big moves” was lower-carbon construction.

This entailed decreasing “embodied” carbon emissions from new buildings and construction by 40 percent by 2030 compared to a 2018 baseline.

Embodied carbon represents the greenhouse gases associated with the production of materials used in construction, like steel and cement. According to a staff report to council, lowering this would involve using “mass timber” (tall wood buildings).

When Brock Commons Tallwood House opened at UBC in July 2017, the 18-storey student residence was described as the world’s tallest mass-timber development. It’s also a favourite of Pembina’s Ebrahimi, and of Patrick Stewart, an architect of Nisga’a ancestry.

Stewart also cited the Centre for Interactive Research on Sustainability at UBC as a personal choice. It has a LEED (Leadership in Energy and Environmental Design) rating, which is the most widely used green-building ranking in the world.

“The building water is 100-percent supplied by rainwater,” Stewart said.

Stewart and Ebrahimi also share a liking for the Vancouver Convention Centre. According to Stewart, the centre’s West Building has the “largest living roof in Canada”.

“It uses seawater for heating and cooling, with on-site water treatment and fish habitat built into the foundation,” Stewart explained to the Straight.

Speaking of fish, Theresa Fresco of the Fraser Basin Council cited the MEC head office in Vancouver as her pick of green buildings.

Fresco, who previously lived and worked in the Philippines and other countries, noted that the MEC building at 1077 Great Northern Way is the first “salmon-safe” certified urban site in B.C.

She told the Straight that salmon-safe features are aimed at better water use. These include a green roof that captures rainwater, which is stored in a 7,700-gallon underground cistern and used for flushing toilets and irrigating the rooftop garden.

In addition, the MEC building’s landscape maintenance does not utilize pesticides.

Fresco said that the MEC facility was designed to be 70 percent more energy-efficient than standard commercial buildings. It also has geothermal heating and cooling and features mass-timber construction.

Meanwhile, the Wilson School of Design at the Kwantlen Polytechnic University in Richmond has LEED energy-saving features that have impressed B.C. Hydro. According to the utility company, these features include radiant slab heating and cooling as well as heat pumps.

Mark Goodman of the commercial real state company Goodman Commercial Inc. cited the Wilson School of Design as a favourite green building when asked by the Straight.

Former City of Vancouver chief planner Brent Toderian picked the B.C. Cancer Research Centre as his choice. The research facility features natural ventilation in its laboratories and offices. It also has a heat-recovery system.

“It ventilates very well; it doesn’t need energy for cooling or heating,” Toderian told the Straight.

Yuri Artibise, executive director of the Vancouver City Planning Commission, picked the First Avenue Athletes Village Housing Co-operative as his favourite green building. It is also where he lives.

Artibise told the Straight that the housing co-op has a green roof with a stormwater catchment for gardens, water features, and toilet use.

According to Boyle, such buildings “allow residents to produce fewer greenhouse-gas emissions because of building features like shared walls and smaller footprints”.

“Of course, many of these buildings would benefit from energy retrofits, and it’s important that those retrofits happen in ways that don’t displace existing residents or result in less-affordable rents,” Boyle told the Straight.

Vancouver architect David Wong cited a home in the Point Grey neighbourhood that he designed.

“The orientation and placement of the home had its south and west faces optimized, so roof areas were planned for efficient solar-panel exposure,” Wong told the Straight.

The solar panels now generate about 75 percent of the electrical supply for the home, Wong noted.

Feature Image: The Brock Commons student residence was the tallest mass-timber building in the world when it opened in 2017. Copyright UBC.

Canterbury technology behind the future of earthquake-resistant construction

Scion benefits from the outdoors – indoors

High-density housing on the rise