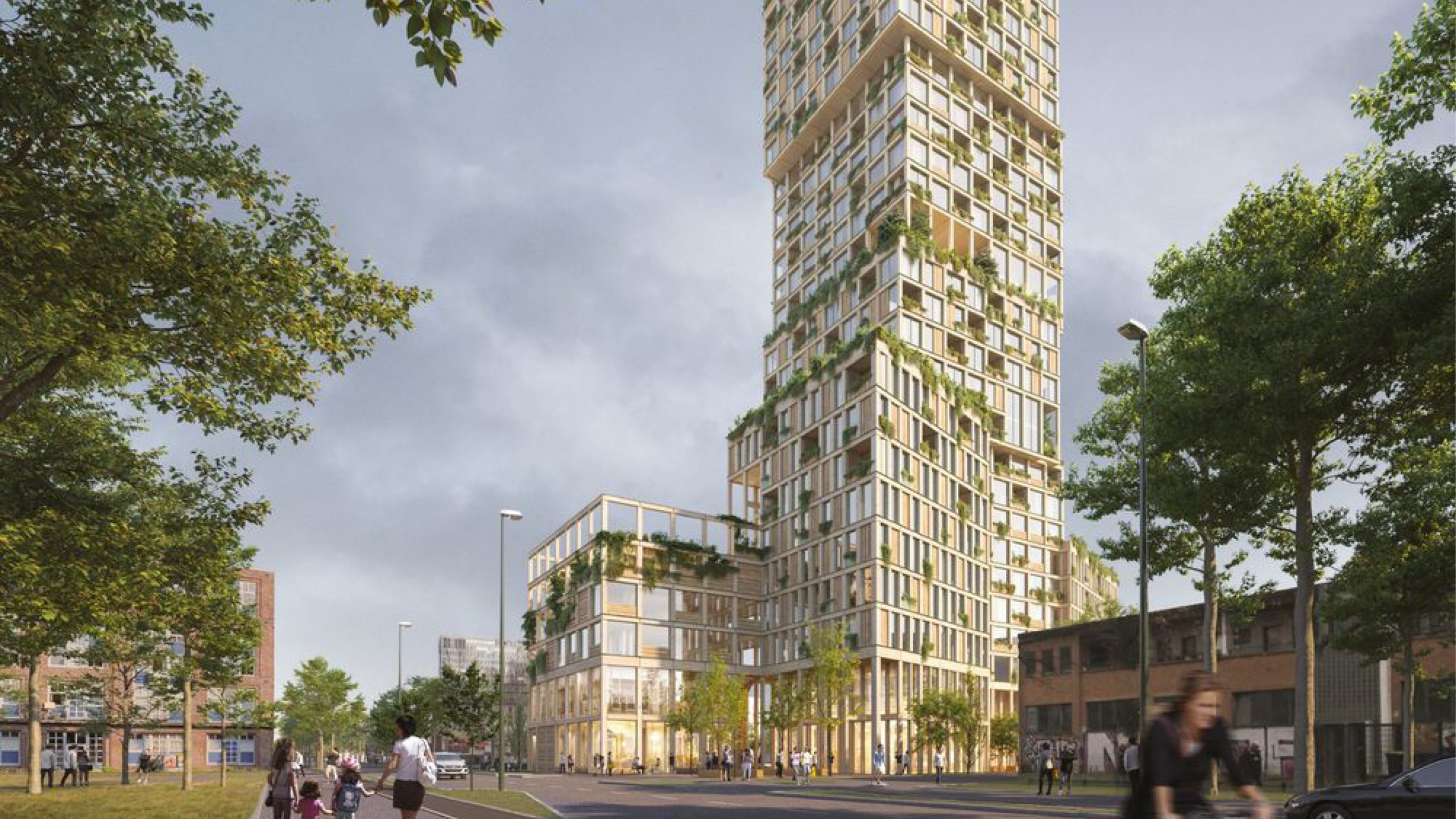 A skyscraper that would be Europe’s tallest wooden building promises a “social and ecological paradigm shift” in a gentrifying neighborhood — and a test for the city’s affordable housing model.

The high-rise mixed-use building that Berlin is planning to construct in the city’s Kreuzberg district is unusual for a few reasons.

The 322 foot (98 meter) tower, whose construction was confirmed on Jan. 29 by sustainable developer UTB, the state of Berlin and the borough of Friedrichshain-Kreuzberg the will be made largely of wood. Costing 90 million euros ($109 million) to build, the tower will be constructed from the engineered wood known as cross-laminated timber, which allows builders to erect tall towers that use far less steel and concrete than traditional skyscrapers. Called WoHo and designed by Norway’s Mad Arkitekter, the 29-story building promises to be Europe’s highest wooden building to date, using reinforced concrete solely for its core and basement.

While the project’s eco-friendly engineering is attracting attention, the complex has other qualities that may be even more interesting. That’s because the tower, and the connected lower-rise buildingsthat will surround it, aspire to be an emphatically community-focused, affordable development. UTB chief Thomas Bestgen has called it the “Anti-Amazon Tower,” referring to the controversial commercial office building that the online retail giant is erecting in eastern Berlin.

If the project lives up to the progressive aspirations declared by the developer and city, WoHo — whose name stands for Wohnhochhaus, or “live-tower” — could serve as a template for how to build a charismatic architectural showpiece in an up-and-coming neighborhood without exclusion or displacement. Friedrichshain-Kreuzberg officials say the goal is not just to provide new housing: It is to direct Berlin, and other cities, “towards a social and ecological paradigm shift,” Kreuzberg housing commissioner Florian Schmidt said in a press release from the state of Berlin.

To that end, the project is built around serving a broad mix of Berliners. Some 25% of the tower will be commercial office and retail space — with preference given to local businesses — 60% will be homes. One third of these homes will be affordable co-operative housing, one third will be market-rate owner-occupied units, and one third will be rent-controlled apartments — overriding the law that exempts new construction from Berlin’s current city-wide rent freeze. Multiple types of housing will be intermingled within the complex, creating a diverse vertical neighborhood of large family units, student studios and assisted living for older residents and people with dementia. There will even be a small cohort of “joker rooms” — referring to the wild card in a deck of cards — designed to be adapted to unanticipated short-term uses. The remaining 15% of the tower’s space, meanwhile, will be allotted to public uses, including a kindergarten and an after-school club, workshops, an indoor play area and a panoramic rooftop with a public café and a sauna open to the general public.

What WoHo  won’t have a lot of, however, is parking.  Space for private cars will be stripped to a minimum, replaced by bike racks, electric vehicle charging stations and spots for shared vehicles. Pre-construction design renderings (always an unreliable gauge of a development’s ultimate character) show balconies and roofs decked with creeping greenery, a feature that would integrate the tower nicely into its location at the end of a recently replanted, very popular spine of green parkland heading out of central Berlin along old rail tracks.