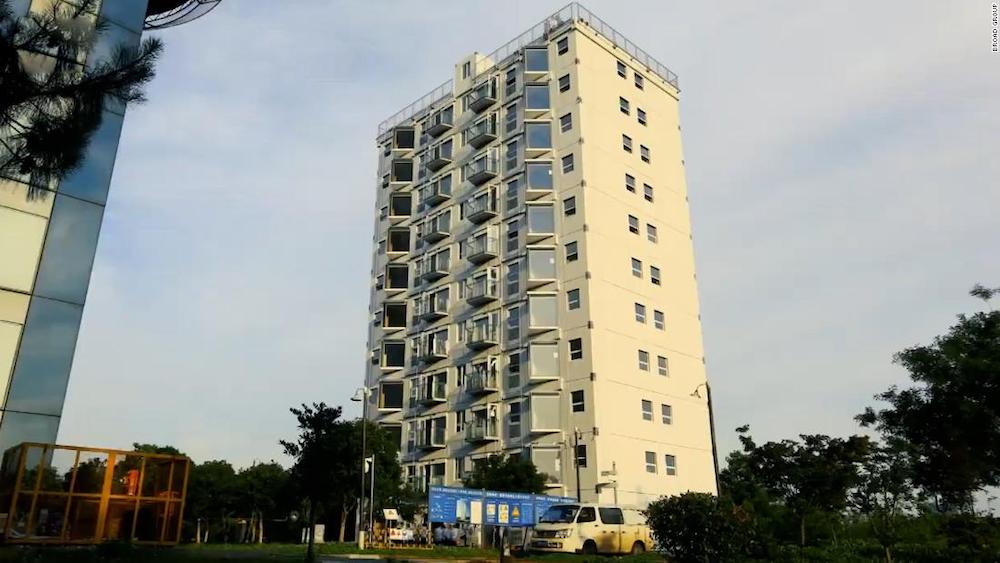 Prefabricated buildings are designed to be put together very quickly – that’s a big part of their appeal, after all. However, you’d be hard-pressed to find a building that goes up as quickly as this recently completed 10-story residential high-rise by China’s Broad Group, which was assembled in just over a single day – or 28 hours and 45 minutes, to be exact.

The high-rise was constructed using Broad Group’s Living Building prefabricated construction system. One of the most appealing things about this system is that each building module has the same dimensions as a shipping container when folded, making it very easy to transport it pretty much anywhere in the world using existing shipping methods.

Each module is prefabricated in a factory and consists of a primarily stainless steel structure that includes wiring, insulation, glazing and ventilation systems (the Broad Group is also a ventilation specialist). So, to put it simply, the basic idea is that you’d take a group of these container-sized modules to a building site and stack them as required, bolting them into place. They’re then connected to power and water, and ready to use.

Of course, as you can see in the video below, for this project Broad Group used a small army of builders and at least three cranes to speed things up and get the job done in that headline-grabbing timeframe, but it’s still a remarkable achievement and a standard site with a typical number of builders should see a building go up very quickly using the same system, too.

Broad Group says that its prefab setup is very durable, earthquake-resistant, and can be dismantled and moved if needed. The firm also says it can be used to make residential high-rises, dormitories, hotels, hospitals, and more.

Even more ambitiously, the firm reckons that the system could be used to build high-rises as tall as 200 stories. To put that into perspective, the world’s tallest building, the Burj Khalifa, has a mere 163 floors. We’ve no word on pricing, but Treehugger reports that you can buy an entire 20-unit apartment block for under US$3 million, not including shipping – which is a steal.

Take a look at this amazing project rise below.